A small group of adventurous chefs, each of whom has done a stint at Enrique Olvera’s groundbreaking temple of gastronomy, Pujol, is raising the metropolis’s cuisine to the next level 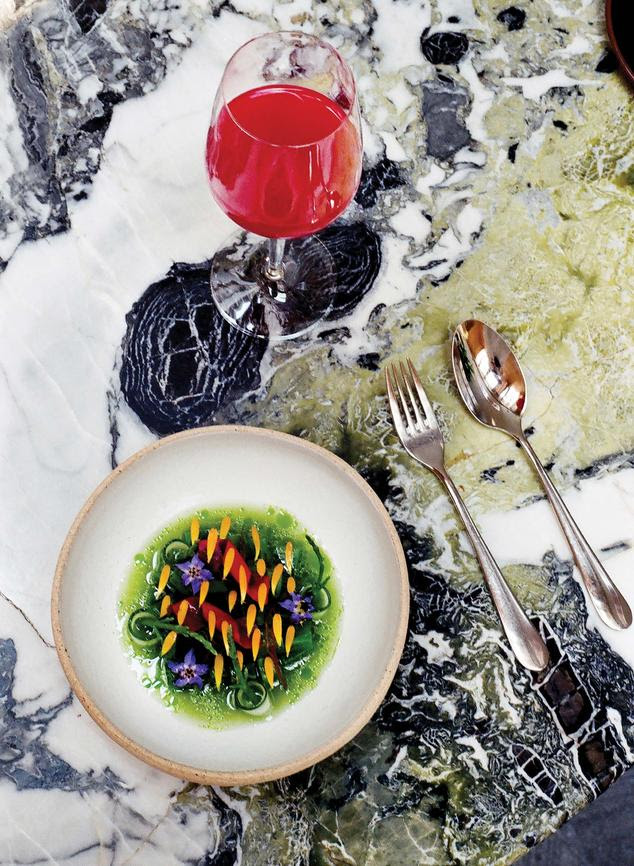 AT 6:30 A.M. on a recent morning, Eduardo García is standing at the bow of a trajinera, a long and well-weathered boat, cruising silently over the glassy canals of Xochimilco. This network of waterways, located toward the southern edge of Mexico City, dates to pre-Hispanic times. García, a 40-year-old chef who goes by his nickname, Lalo, owns three restaurants in the city’s Colonia Roma and Colonia Juárez neighborhoods, less than an hour’s drive from here. This morning he is explaining how farming on man-made island plots called chinampas—a technique dating back centuries that takes advantage of the area’s nutrient-rich sediment—will make for a significant culinary stride in a metropolis that’s already among the most exciting places to eat in the world.

When Lalo steps off the trajinera onto a chinampa, his enthusiasm for agriculture becomes visible. “Mira, mira, mira,” he says, pointing to plants growing from nearly black soil. “Herbs for Pujol,” he says, referring to the restaurant where chef Enrique Olvera decided Mexican cuisine could be both contemporary and soulful. Lalo continues to list other acclaimed restaurants sourcing ingredients here. “Radishes for Carlota. A special kind of spinach for Quintonil.” 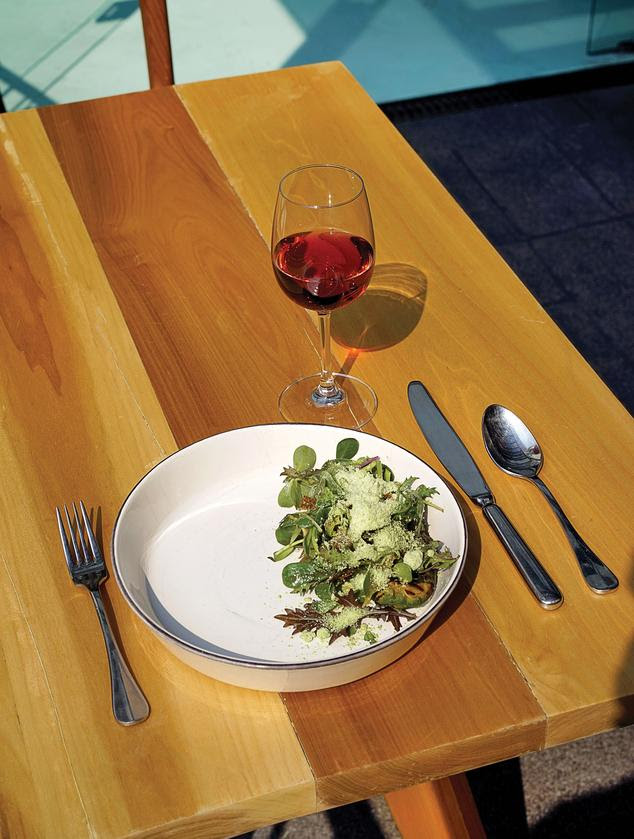 While this loamy plot is managed by an agricultural initiative called Yolcan, Lalo says restaurants are building their own dedicated chinampas with guidance from the organization. “We’ve bought land in Xochimilco to start farming,” says Olvera. Lalo sees even greater potential. “I have this idea to do something like a Mexican Stone Barns,” he says, drawing a parallel to Dan Barber’s celebrated farm and restaurant in Pocantico Hills, New York, a short ride from Manhattan and one of the most coveted tables anywhere. “Or we could do a giant organic food park.”

When Olvera opened Pujol in 2000, at the age of 24, he didn’t intend to launch a food movement in Mexico City, one that Lalo, who worked at Pujol for three years, is championing alongside a small group of the restaurant’s alumni. Collectively they’re pushing the city’s contemporary cuisine forward. “I’ve never felt it’s my duty to have an influence,” Olvera says. “But as a group, we’re able to make a bigger impact. With the work at Xochimilco, we can help change the food system.”

Before Pujol, fine dining in Mexico City usually meant paying high prices for European cuisine, often in a rote restaurant off the lobby of a hotel. “Or rich Mexicans would take their planes to New York to eat dinner,” says Lalo. But Olvera’s signature establishment—now the most famous progressive restaurant in the country and one that has catapulted its chef to superstardom—struck a chord conceptually, appealing to Mexican identity by using native ingredients to delicious and compelling ends.

Suddenly mole, an age-old sauce, was being treated as a fine-dining ferment and served as a dish on its own. Corn, the most basic Mexican staple, got an haute makeover, presented in a gourd, seasoned with powdered ants and streaked with chile-coffee mayonnaise. One consequence of devising this new Mexican cuisine was attracting like-minded chefs who embraced Pujol’s mission and ultimately helped it evolve. “If you wanted to live in Mexico City and cook that kind of food,” says Olvera, “there was nowhere else you could really work. Putting Pujol on your résumé wouldn’t get you anywhere, so you had to stay for a while.” 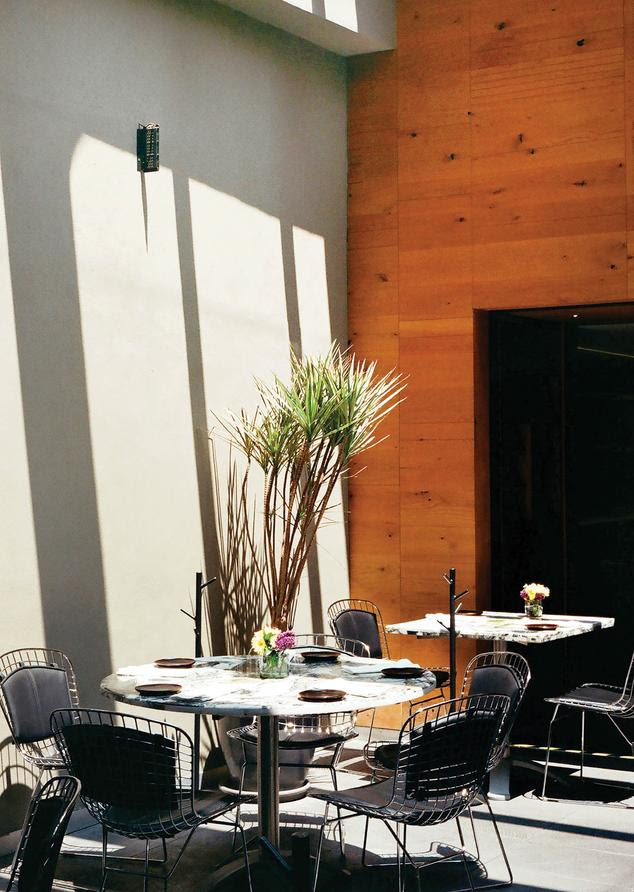 Lalo was born in central Mexico, in the city of Acámbaro, but grew up in the United States as part of a family of migrant farmers. He started working the fields at the age of 5, undocumented and moving about the country in accordance with planting and harvesting schedules. “Citrus in Florida, onions in Georgia, cucumbers in Ohio, apples and stone fruits in Michigan, mushrooms in Pennsylvania,” he says. After being deported from the United States (for a second time) in 2007, Lalo made his way to Mexico City. “I was skeptical of staying in Mexico, having heard so many bad things about the food business,” he says. “I looked for the best chef. Enrique was the only choice.” Olvera calls Lalo “one of the most talented cooks I’ve ever met in my life.” He knew Lalo wouldn’t stay in his kitchen long. “He was the first person to leave Pujol to start something ambitious on his own,” Olvera says.

Since leaving Pujol in early 2010, Lalo has made his own mark as a chef-restaurateur. Havre 77, his latest, is esteemed for its raw bar. Lalo!, which opened in 2014, focuses on casual breakfasts, sandwiches and pizzas. And there’s Máximo Bistrot Local, the flagship he co-founded with his wife, Gabriela López, an intimate spot where the room is full of regulars and the broccoli-cilantro soup is spiced with mustard greens and garnished with caviar. Lalo’s food doesn’t rely solely on the Mexican palate, but his pride in cooking with Mexican products is unwavering.

“The biggest problem people have with Máximo is that they can’t get a table,” says Lalo. “People tell me it should be a private club.” From the outside, it’s understated, almost hidden in plain sight. Inside, the lighting is low, candles flicker, guests sing to each other melodically across their tables, reflecting their good mood. It reads like foreplay. Lalo stresses that Máximo is an everyday restaurant, nothing fancy. He prefers to let the food speak for itself—he’ll nod at a plate, as if to say, Just taste it. Despite the ruggedness of his upbringing, Lalo’s dishes possess an uncommon elegance. His roasted octopus comes with black and green moles, studded with toasted garlic. His buttered Pacific sea snail is brightened by an acidic hit of soy-ginger vinaigrette. Bold-tasting greens and herbs from the chinampa amplify the flavors. It’s a restaurant any city would be lucky to have. “But people are proud to have it here,” Lalo says.

On a quiet street in upscale Polanco, lunch service begins at Quintonil at 1 p.m. The restaurant’s 36-year-old chef, Jorge Vallejo, worked with Olvera from 2007 to 2010. His wife and partner at Quintonil, Alejandra Flores, was Pujol’s director of operations; she conducted Vallejo’s job interview. They opened Quintonil together in 2012, and it now ranks just two spots behind Pujol, at No. 22, on the current list of the World’s 50 Best Restaurants (on the 2016 list, it surpassed Pujol, soaring to No. 12). “Jorge has had the ambition from the beginning to be one of the most important chefs in Mexico,” Olvera says.

Over the next several hours and through more than a dozen courses, Vallejo achieves the difficult task of making his spin on contemporary Mexican cuisine feel simultaneously comforting and like an artistic experience. The meal starts simply, with soufflé-like tortillas, two complex salsas made in a style Vallejo learned from his grandmother and a black-bean purée, topped with pungent shreds of hoja santa. The bright green of the hoja santa leaf signals the rush of colors to come. Cactus ceviche looks electric, with purple borage blossoms, orange calendula petals and slices of beet. Zucchini-wrapped shrimp wears its own flower crown while sitting on a miniature reflecting pool of shrimp emulsion. Huitlacoche, a fungus grown on corn, is poached in mussel stock for eight hours before being served in a tender, ash-hued hunk, surrounded by tiny orbs of trout roe and a smattering of fresh herbs. Every time the tortillas are gone, more appear.

Flores stops by the table holding her and Vallejo’s 10-month-old daughter, Estella. The chairs in the restaurant’s anteroom were taken from Flores’s grandmother’s home. At Quintonil, the refined and the familial are one and the same. “Mexico City is a big city,” says Vallejo. “It’s up to food to make it a family.”

When a 7.1-magnitude earthquake shook Mexico City in September, causing catastrophic damage (all the restaurants mentioned in this story were spared), Olvera and his former colleagues went to work delivering aid to the community at large. Lalo used Havre 77 as a donation center for goods. Pujol turned out tamales to feed rescue workers. Vallejo cooked for shelters, for both their volunteer staffs and for those left without a home.

“We’re planning on helping people for as long as they need it,” says Sofía Cortina, the 25-year-old pastry chef of Carlota, a restaurant situated inside a hotel of the same name, located in Colonia Cuauhtémoc, just off of one of the city’s main boulevards, Paseo de la Reforma. Perched above the hotel’s glassed-in, above-ground pool, Carlota features the joint efforts of Cortina and Joaquin Cardoso, 36, both products of the Pujol system. 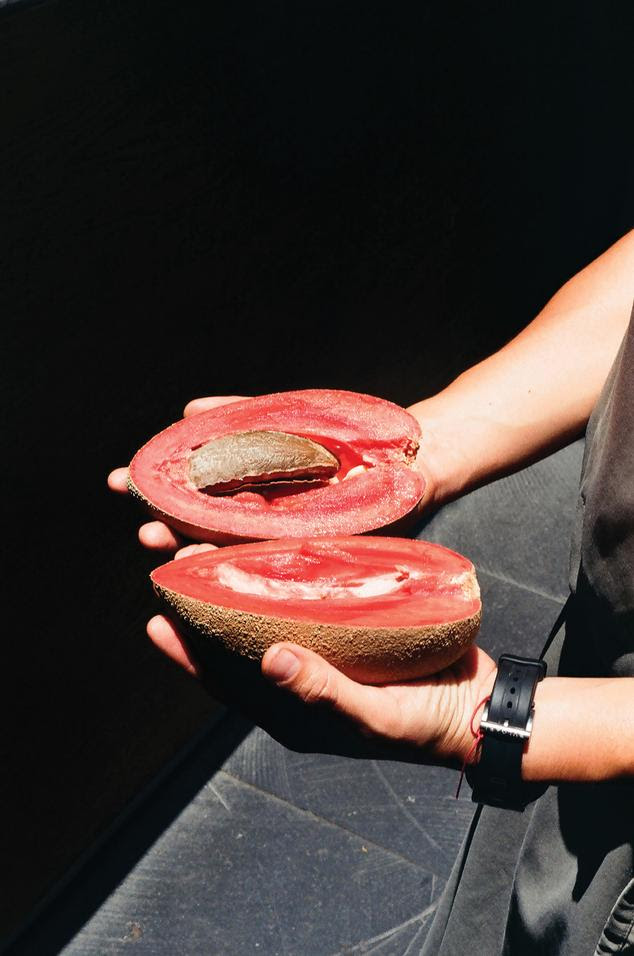 “They’re so good with fruits and vegetables,” says Olvera. They’re also masters of contrasting texture. Cardoso’s grilled avocado with goat cheese granita and slices of lightly smoked eel was both charred and custardy. His smoked-wagyu tartare came with a chewy tabbouleh made of seeds, smooth black blots of burnt eggplant purée and intensely peppery greens from Yolcan. Cortina, who doesn’t use sugar in her desserts, due to the superior, balanced sweetness of Mexican fruits, closed the meal with a tartlet featuring mamey, a tropical tree fruit, two ways: as a crème brûlée filling and raw on top. “You don’t get mamey elsewhere,” says Cortina. “Only here.”

Earlier Vallejo had sent me to the roof of Quintonil with his 29-year-old chef de cuisine, Klaus Albert Mayr, to show off another agricultural stride—a roof garden where the restaurant plans to grow more of its ingredients, with 50-plus varieties of plants, including strawberries Vallejo presented uncooked to cap off the meal. Mayr represents the next generation, a rising chef who chooses Mexico City as his home base and the offspring of Pujol as his mentors—this, after cooking at the French Laundry in California, El Celler de Can Roca in Spain and Geranium in Denmark. “It’s only going to get stronger here, culinarily,” says Mayr, raising a beer. “My money’s on Mexico City.”